The UK has a long tradition of celebrating a golden wedding anniversary in style. When parents, grandparents, friends or family reach such a magnificent milestone, it’s always considered good cause for celebration. There are lots of options when you’re looking for golden wedding anniversary gifts in the UK, and many different ways in which you can involve friends and family in marking the occasion.
Wedding anniversaries should be marked with a gift, and when it comes to gifts for a 50th wedding anniversary both traditional and modern gift lists include gold as the symbol. This tradition dates back to the Holy Roman empire, when a husband gave his wife of 50 years, a wreath made of gold. The tradition continued and records have shown that in medieval Germany, friends and neighbours gave the wife a wreath made of gold.

Why is Gold Used to Represent 50 Years of Marriage?

The true meaning behind why certain materials are used to represent different milestones in a relationship is not really very clear. However it is believed that as the years pass and your marriage gets stronger, this is reflected by gifts that are increasingly durable. As the years go by, so the gifts increase in worth and strength, from paper for the 1st anniversary, right up to diamond for a 60th anniversary.
Gold symbolises prosperity, strength and wisdom – the core of what a 50 year marriage is all about. It perfectly captures the lifelong love you’ve been sharing for all those years.

Gifts for a Golden Wedding Anniversary in the UK

A 50th wedding anniversary should be marked by a very special gift, but there are so many options that finding the right one can be difficult to say the least. After 50 years of married life together there probably isn’t much that the couple want or need. Whether you’re looking for a gift for your husband, wife, parents, grandparents, family or friend the traditional and modern gift lists suggest choosing something made of or coloured gold. So let’s give you some helpful suggestions, whatever your budget.

A Bunch of Golden Flowers

Pop down to your local florist and you’ll be amazed at the range of golden flowers available. There are also a wide number of varieties for which gold features in their name. Roses in particular have a number of appropriately named varieties such as “Golden Anniversary”, and “Golden Wedding”. There are marigolds, sunflowers, daffodils, tulips and crocuses, all of which can be wrapped in gold paper and given as a budget-friendly golden wedding UK gift. If you’ve got the finances to push the boat out then you might want to consider a gold dipped rose from Eternity Rose. They’ve found a way to capture the magnificence of a natural bloom, and preserve it for eternity. Each bloom is handpicked at the peak of its beauty, from their own nursery. The gift of an Eternity Rose can be made even more memorable by being engraved on the stem with a few well chosen words. 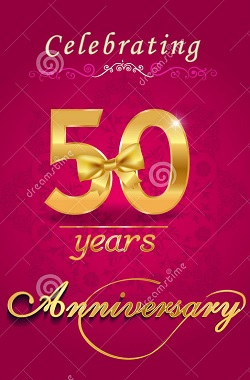 Why not buy each other a beautiful gold eternity ring, to show your love for each other and how you plan to spend many more years together? They are available in a wide range of styles, and you shouldn’t have a problem finding one that suits your partner’s taste. Take a look at the other items of jewellery that your partner wears, and you should get a good idea of what they’d like best. And it’s not just rings that can be found in gold. But we’re guessing you already know this. Earrings, necklaces, bracelets and many other accessories such as tie-pins, hat pins, brooches and watches.

If you’d like to do something a bit different but still keep the gold theme, buy tickets for a show and wrap them in gold paper, or present them in a gold envelope. Think of what the happy couple or your partner would love to do and buy the tickets. Most shows sell their tickets online nowadays, so you won’t have a problem getting the ones you want. Tickets for the opera, theatre, festival, music concert, sporting event, the options are endless. It all depends on what the happy couple would love to do.

Book the Holiday of a Lifetime

Celebrating a golden wedding anniversary calls for something a bit more than a B and B just down the road. Time to splash out and treat yourselves to the holiday of a lifetime. How about the Portuguese Gold Coast or the Gold Coast in Australia, if your pocket allows? Both destinations have some beautiful sandy, golden beaches and miles of coastline to explore. But if you’d prefer to stay closer to home, there are hundreds of locations throughout the UK that are definitely worth a visit. If it’s your golden wedding anniversary, choose something that you’d both enjoy doing and make this anniversary one that’s truly memorable.

The UK has a very famous couple living on its shores. A couple that have made it to 50 years and are now far beyond that important milestone. The Queen and Prince Philip tied the knot on 20th November 1947, and are looking set to carry on married life for a few more years yet. The wedding took place in Westminster Abbey, in front of 2,000 invited guests. They were distant cousins, and first met at a wedding in 1934. They became secretly engaged in 1946, but the engagement wasn’t made formal until Elizabeth reached 21 in April 1947. The Royal couple celebrated their golden wedding anniversary on 20th November 1997, by attending a luncheon at the Banqueting House in London. The Queen stood up and marked the occasion with a speech that looked back over 50 remarkable years.