50 YEARS TOGETHER – TIME FOR A CELEBRATION

Golden wedding anniversaries are a great reason for celebrating. Living together and keeping the love flowing for more than 50 years is not a common occurrence, especially in today’s throwaway world. Statistics have shown that as many as 50% of marriages fail, which makes half a century of wedded bliss all the more special. Do you know anyone, or are you about to reach your 50th wedding anniversary? Are you struggling to find the right gift? Don’t lay awake at night worrying, because we’re here to help you find the perfect golden wedding anniversary gifts. 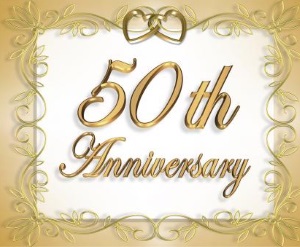 If you reside in a Commonwealth country, you can arrange for a message from the monarch to recognise a 60th, 65th and 70th wedding anniversary, but you will have to apply to Buckingham Palace if you live in the UK, or the Governor General’s Office in other Commonwealth realms.
In Australia, the Governor General can also send a letter of congratulations for a 50th anniversary, which might be one idea for golden wedding gifts. You can also receive salutations from other members of the Government.
In the US, you can request a greeting from the President for a 50th wedding anniversary, and for subsequent years.
Roman Catholics can request a papal blessing via their local diocese for special wedding anniversaries, for example 25th, 50th and 60th.
This just goes to show that although we may no longer follow Roman traditions by giving wreaths, reaching such milestones is still considered very special.

Has it Always Been Customary to Give Wedding Anniversary Gifts?

It is thought that the tradition of giving and receiving gifts or presents, to celebrate a wedding anniversary, originated in medieval Germany. It was customary for the wife of a married couple, who had been fortunate enough to live long enough to enjoy their 25th wedding anniversary, to receive a silver wreath from friends and neighbours. It was considered good fortune to remain healthy for such a long time, and was a way of congratulating the couple. For the 50th anniversary the wife would receive a gold wreath.
The number and variety of symbols used to celebrate more milestones have gradually increased over the years, and the German tradition involved giving gifts that correlated with the different stages of married life.
The symbols have changed slightly over the years. As an example, in the UK, the diamond was originally a symbol for a 75th anniversary. But Queen Victoria’s celebrations for 60 years on the throne, were marked as her Diamond Jubilee, so this is now more commonly used to symbolise 60 years of marriage.
Modern conventions for the giving of gifts date back to 1937. Previous to that only 1st, 5th, 10th, 15th, 20th, 25th, 50th and 75th had an associated gift. The Jewelers of America introduced a wider ranging list in 1937, which gave every year up to the 25th and every 5th year after that, its own special gift. Quite a good marketing ploy that seems to have enjoyed great popularity, and no doubt boosted jewelry sales.
Gifts for a golden wedding anniversary traditionally revolve around something that’s gold. But that doesn’t necessarily mean it has to be an item of jewelry. There are plenty of other attractive and interesting alternatives. Photo frames, matching goblets, commemorative plates, gold dipped golf ball and tee set, gold dipped poker cards or a golden thimble. The only thing that limits your choice of gift is your own imagination. Pretty much anything can be dipped in gold to make an extra special present.

Famous Quotes in Relation to Marriage

“Experts on romance say for a happy marriage there has to be more than a passionate love. For a lasting union, they insist, there must be a genuine liking for each other. Which, in my book, is a good definition for friendship.”

“There is no more lovely, friendly and charming relationship, communion or company than a good marriage.”

“After about 20 years of marriage, I’m finally starting to scratch the surface of what women want. And I think the answer lies somewhere between conversation and chocolate.”

Let’s face it, having been married for 50 years, there’s probably very little you actually need or require, so most 50th wedding anniversary gifts aren’t going to be essentially useful. Whether you’re buying for a special couple, friends, family, parents or for each other, the gift has to be special and meaningful, but doesn’t need to be practical. Think of some things that the special couple like doing, such as wining and dining, visiting new places, trying new things, reading, enjoying the theatre, collecting special items, or reminiscing, and try and find a gift that will be fun and enjoyable for them both.

Special Golden Anniversary Gifts You Can Make Yourself

Only a few lucky couples will reach this important milestone in their married life, and it’s the ideal opportunity to show each other, or the lucky couple, how much they mean to you and each other. Nothing speaks volumes more than golden anniversary gifts that have been hand made. Why not try some of the following ideas?

Golden Wedding Anniversary Presents Don’t Have to be Boring

Celebrating a golden wedding anniversary is a great time to try something new and different. You’ve likely got all the trinkets and ornaments you’ve got space for, and your walls are filled with beautiful art and personal photos, so take the opportunity to do something completely off the wall and out of your comfort zone. You never know you might enjoy it so much you take it up as a new hobby. There are a wealth of activities, places to visit and things to see that might just lead to a new adventure. Renewing your wedding vows, throwing a party, going out to dinner – they’ve all been done before, many times over, so why not try something unusual?

A TRIO OF FAMOUS COUPLES THAT MADE IT PAST 50 YEARS

The tabloids are littered with marital tales of woe, split ups, messy divorces and unsavoury liaisons, but there are some famous couples who have stood the test of time.

Finding the perfect golden wedding anniversary gifts can be quite a challenge but it’s not an impossible task. There are a number of useful websites, with unusual, contemporary, traditional and more unusual ideas to help you in your quest. The opportunities and ideas are seemingly endless, so you’re bound to find something that suits the occasion. From the simplest trinkets to the most bizarre, there is no end to the recommendations you’ll find online. There are so many to choose from that you might find yourself spoilt for choice. So why not save some of these ideas for another momentous event? Another one is bound to come along.